Luis Machicao is the NICEST man you will meet. He and I connected through Instagram and were fast friends. He has designed a few dresses for friends and mother of the brides that I know and I wanted to know more this man I had heard about through the small Charlotte grapevine. Luis has been designing clothes for women and men for 30 years and has lived such an interesting life! Having been in the fashion industry for so long, I have such an appreciation for designers and how they got started and “their story.” Luis is one of them.

Luis was born in Peru and as a boy used to lay out his clothes for church and his housekeeper claimed that she knew from that point that he was going to do something with fashion. He cared about the clothes and how he looked in them…he liked things that were well made. After college, his friend took him to Paris in the summer and the friends mother asked him to come somewhere with her and told him what to wear. They ended up going to Paris fashion week. He was hooked from that moment. He was at the Chanel show and realized that the fashion industry was ruled by men, which was a shock for him. He dropped everything and told his family he was going to be a fashion designer. They fully supported him and off he went.

Luis went to school for fashion, then to Paris for training specializing in women’s clothing. His main interest was wedding and gala gowns. After Paris, he went back to his hometown of Peru and began designing for the President and first lady of Peru….his name got out in the fashion world and the rest is history. He started doing wardrobe for the ballet, theatre, bridal, min-series, etc.

In 1998 he moved to the USA for political reasons and resided in Texas, where he had a studio and made a name for himself – lots of pagent gowns (shocker! haha!), red carpet and wedding gowns. In 2001, he moved to Charlotte and fell in love with it…this is his home. Luis started showing his collections at New York Fashion Week and in 2013, had a show at Paris Fashion week as well, where he won an award for Best Newcomer in Fashion. Luis has also now designed costumes for 38 movies!

The above picture is a family friend of ours, Suzanne Belk – she has had several dresses made by Luis. This was for her son’s wedding a few months ago. Women are having a harder time finding clothes that are appropriate for their age and Luis is here to help. During Covid, he said his alterations saved him. No one was getting married and going anywhere. Luis makes custom dresses, he can completely remake a dress as well – he can deconstruct it and put it back together how you want, he does alterations, can also custom make mens suits and tuxedos as well. He never says no to a client. He has over 250 recurring clients…I’m telling you, he is SO wonderful and fun, you will want to come back just to see him!

Luis is located in the GALLERIES AT 811 on Providence Rd. Everything is by appointment. He does all sizes and shapes. His timeline for a wedding dress is 6-12 months and alterations is 2-3 weeks.

Meet Luis and his husband Jeff Wallin. Charlotte is lucky to have you Luis! 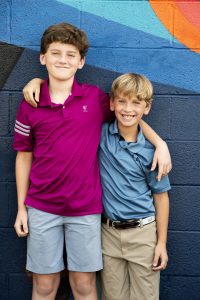